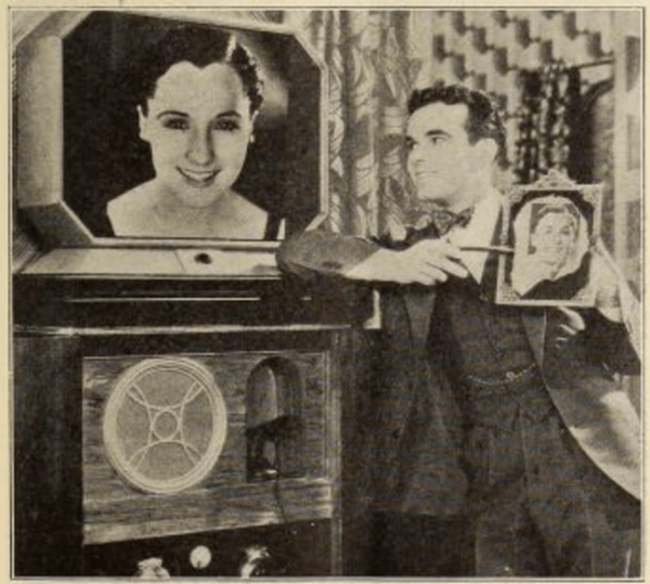 In 2016, Richard Koszarski and I composed an international annotated filmography of television in motion pictures from before 1939. The filmography, with Koszarski’s introductory essay, was published in The Journal of E-Media Studies – right here.

The filmography is a work-in-progress, as more research on the topic continues to produce new finds. In this page, I post new entries we have discovered since the original publication, as well as corrections and added information on films we have discovered along the way. Please check for updates, and if you have suggestions for film we should feature here, please let me know in the comments sections below.

A short Oliver Hardy comedy. At one scene, the villain uses a “Sniffiscope,” a mechanical device consisting of a film rewind crank and some sort of phonograph horn. As he looks into the device and turns the crank, the film cuts to various masked shots of what else is going on at the time.

In episode 2 of Feuillade’s crime serial, the eponymous caped crimefighter kidnaps a corrupt banker. At his hiding place, he observes the banker using what the intertitles describe as “a moving mirror controlled by an electrical device… like an implacable eye.”

Die Spinnen I: Der Goldene See [The Spiders, part I: The Golden Sea]

The first part of Fritz Lang’s adventure film includes a scene in which Lio Sha, leader of the mysterious “spiders” group, uses a visual device masqueraded as a normal mirror in order to spy on a meeting that takes place in another room. The film is ambiguous about whether or not it is in fact an electrical transmission device, but some hints suggest that it might be wired, and for some contemporary viewers it was understood as a televisual device. Lotte Eisner’s seminal The Haunted Screen, for example, describes the device as a mirror “which ‘televises’ scenes” (p. 239).

A Message from Mars

This American remake of a British 1913 science fiction feature (itself a take on A Christmas Carol) tells the story of a selfish inventor who is involved in financing a device to communicate with Mars, before dreaming of an encounter with a Martian messenger who makes him see the error of his ways.

In this British mystery feature, “an inventor using his television-like device to spy on his wife, whom he suspects of having an affair with a Frenchman, and uncovering a jewel thief in the process.” (Motion Picture Guide Silent Film 1910-1936, 254)

This feature-length kultirfilm, which ambitiously aims to describe the universe and man’s place in it, depicts in its sixth act a journey outside solar system. In a spacecraft located ninety-five billion kilometers from earth, an astronaut switches on an electrical screen device (which the intertile dubs ‘fernseher’) in order to see what is happening back home. Due to the immense distance from earth, the screen image shows what has occurred ten year earlier. As the spacecraft increases its speed beyond the speed of light, the astronaut is able to reverse the temporal order of the televised images and to the receive image from previous times, back to the biblical era.

In this late installment of the Maciste series, the legendary strongman goes to hell to fight demons who attempt to corrupt him. In one of the scenes, a she-devil takes Maciste on a flying dragon to watch a television projection of events that that take place at the same time back on earth.

A 1929 comedy short starring Jerry Drew (aka Clem Beauchamp). A man tells his wife he is staying late at work. “But through her television set she sees hubby at his office planning to go to the party with some chorus girls.” (Film Daily, Feb. 17, 1929).

“After the Naggers move into a new luxury apartment, Mr. Nagger discovers that there is a hole in the wall adjacent to his neighbor’s apartment. To camouflage the hole, he places a radio in front of it. When Mrs. Nagger turns on the radio, she peers through the speaker in the receiver, noticing a man in the next apartment. Fooled into thinking that the radio receiver is really a television, she instructs her mother-in-law to look into the set. A commercial for mineral water comes on the air, claiming, “The Cascade Spring Company eliminates the middle-man. You get your water direct from the spring into your home.” Meanwhile, Mrs. Nagger and her mother in-law gaze into the radio speaker hoping to see a televised image. Instead, they find themselves drenched by a stream of water. Since a prior scene in the film shows that the next-door neighbor is actually squirting water at the Naggers through the hole in the adjacent wall, the joke is on the technically illiterate women who can’t distinguish between electrical and real space.” (from Lynn Spigel, Make Room for TV: Television and the Family Ideal in Postwar America, pp. 115-116)

I Ain’t got Nobody

A Fleischer “Screen Song,” featuring a lion zapping through various dance bits from all over the world on his television set, eventually watching a performance by the Mills Brothers Quartette.

At the start of the film, the character played by Elliott Nugent comes home and is greeted by his mother. “Is that you, Bill?” she says.  “In person,” he replies.  “Not by television.”

An animated short featuring Scrappy and his friends as they watch programs of classical music, jazz, farming, and a boxing match on a hand-built television set, which appears to consist of both vacuum tubes and a scanning disc.

Buck Rogers in the 25th Century

This low budget science fiction short was commissioned by John F. Dille’s newspaper syndication service to promote the Buck Rogers comic strip and premiered in the Chicago World Fair in 1934. Two futuristic devices are used in the film by scientist and Rogers associate Dr. Huer (who is played by Harlan Trabell, a stage magician and illustrator who also directed the film). One is a :cosmo-radio-photograph” that shows a picture of where the “war arrow” of a Martian attack is pointing; the other is a “cosmic radio-television” which shows the doctor views of the spaceships of the tiger men from mars as they are attacking earth.

She Shall Have Music

In this British light musical about a band broadcasting a show from a yacht in the South Seas. “Ingeniously used here is the idea that a wrist-watch television set enables the disabled yacht to get into visible and audible touch with home.” (Motion Picture Herald, Dec. 21, 1935)

A short film in the long running MGM series of cautionary tales, Crimes Does Not Pay. “Sanders, a brilliant scholar in high school, secures at graduation a job in a local radio factory. He thinks he has perfected a new method for television, manages an interview with the president of the company, is told that the company’s engineers will examine the idea, although it does not sound possible … Believing he has been sidetracked by the company, sanders willingly tells an old acquaintance how to put how to put a burglar alarm out of commission. He is soon running a radio repair shop as a blind, and providing his friend’s gang with the technical advice which makes their crimes possible. He later takes part in a holdup, is surprised, and shoots a man.” (Catalog of Films for Classroom Use [New York: Teaching Film Custodians, 1939], p. 245)

A British variety feature in which comedy duo the Western Brothers view assorted acts through their experimental television equipment.

The Hills of Old Wyomin‘

This short animated parody of scientific-novelties newsreels features a televisual “fool-proof telephone,” with which a suspecting wife can check on her unfaithful husband.

A low budget independent exploitation film, which allegedly cannibalizes footage from the Italian silent version of Dante’s Inferno, and deals with “a scientist’s latest invention: a cathode ray tube that can pick up transmissions from Hades” (Michael Benson, Vintage Science Fiction Films, 1896-1949, page 68.).

Larceny on the Air

One scene in this B crime drama features a doctor speaking about the dangers of radium poisoning on a radio broadcast, saying, “I’m sorry that television isn’t in every home today, so that instead of words I could show you the untold miseries brought on by these quack products.”

A short “Puddy the Pup” cartoon from Terrytoons, in which the puppy and his kangaroo friend watch a live transmission of a coronation on an NBC television. Just two days before the cartoon’s release, the BBC televised the coronation of King George VI, its first outside broadcast.

A television camera, camouflaged as a book, is used as a spying device in this B-serial depiction of an ongoing battle between a masked supervillain named “The Octopus” and a masked crimefighter named “The Spider.”

In this 12-parts adventure serial, based on a popular comic strip, a large-screen video-telephone device allows a mysterious villain to communicate orders to his hitmen. Interestingly, the device is used only for unilateral communication – the villain speaks to the gang, but they do not speak back; this is all the more cryptic, as the villain always appears on the screen hidden behind a mask.

This Nazi-era science-fiction kulturfilm depicts the launch of a space rocket, which is preceded by a televised press conference. Production of the film started in Munich in 1937 or 1938, but budgetary and political constrains held the release until 1940.

Toward the end of Hitchcock’s first American Film, which was shot in 1939, the characters pass for a brief moment by a large poster advertising a “Radio and Television Exhibition.”

An image from the film

An image from the film

Images from the film

The 1937 film listed as Television Romance appears to be also titled Mr. Mugzee in Television created by animator Charles Bennes. The short puppet animation romantic comedy revolves around Mugzee’s attempts to impress a young woman who is rather enamored with a television star, which include putting up his own television show.

Updated plot description: Comedian Henny Youngman is trying to interest investors in a television device, by showing various musical acts. The film uses a particularly cheapest method of showing a television image on this screen: the curtain in front of the television device is pulled back and the camera tracks in, capturing musical numbers that are staged on a set right behind the device. In other words, what we see is just a hole in the wall of this set, beyond which is where the musical numbers take place. A focusing problem gives the trick away.

For the original published version of “Television in the Cinema Before 1939: An International Annotated Database, with an Introduction by Richard Koszarski” see here.